Movies That Fell Through the Cracks # 75 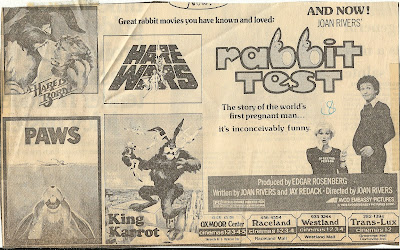 It's hard to believe these days when Joan Rivers is so often simply the punchline to a bad joke but there was a time when she was amusing, talented and actually--dare I say it--funny. This all changed in 1978 when Rivers, given free rein to make a feature motion picture, brought forth RABBIT TEST.

It says something about a comedy movie when its ad campaign is the funniest thing about it.

To be fair, RABBIT TEST gave us the film debut of Billy Crystal, without whom we wouldn't have had many memorable Oscar moments. He's terrible in it but you have to start somewhere.

Michael Keaton also got his start here and may well have been responsible for failed attempts at destroying all prints.

The plot? No plot, really. Just a series of unfunny gags and over the top perfomances based around the world's first pregnant man. Much of Billy's dialogue sounds like Rivers...which makes sense since she wrote the film as well as directed it. The humor is tasteless and ultimately goes nowhere.

In a self-conscious conceit, Rivers, who had been appearing fairly regularly on HOLLYWOOD SQUARES at the time, writes in pointless cameos for some of her SQUARES co-stars including Roddy McDowell, host Peter Marshall and center square Paul Lynde. Other familiar faces dot small roles as well, probably just as a favor as Joanie was constantly on talk shows back then bragging about how she talked people she couldn't afford into appearing in her low-budget opus. Rivers herself cameos with perhaps the most tasteless gag of all. Even young daughter Melissa is on hand!

The whole thing was remade--in a way--with Arnold Schwarzenegger in the Billy Crystal role. That concept alone makes the later film funnier than this one.

I'm not going to link to it but the whole mess is on YouTube free should you wish to subject yourself to this HOLLYWOOD SQUARES footnote.

Oh, and if you still don't believe how bad RABBIT TEST is, four words---Billy Barty in blackface.
Posted by Booksteve at 7:51 AM