Creepy and Eerie Publisher in a Flintstones Comic! 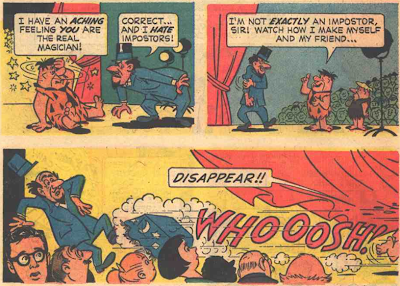 Talk about an unexpected tie-in. One of my all-time favorite comic books is 1965's THE FLINTSTONES AT THE NEW YORK WORLD'S FAIR but I had forgotten or never noticed that it was published through Western (Gold Key) but by a subsidiary of Warren Publishing, the folks who brought you CREEPY, EERIE and FAMOUS MONSTERS OF FILMLAND (as well as later VAMPIRELLA). Seems publisher Jim Warren picked up some of the licensing rights and thus did a couple printings of this great, fun souvenir! One of my Facebook pals pointed thisout tonight as we discussed this week's 50th anniversary of TV's first prime-time animated series.
Here, however, is something I don't see listed anywhere and certainly never would have caught without the above knowledge! The characters are all drawn very much on-model and the incidental characters, human and otherwise, are done in Hanna-Barbera's signature style, also. All except one! In the story entitled "On the Job Straining," Fred attempts a magic act. His audience is filled with typical H-B non-descript human characters and...as
seen in the lower left hand corner of the bottom panel below, one strangely realistic gentleman with detailed hair and thick framed glasses. 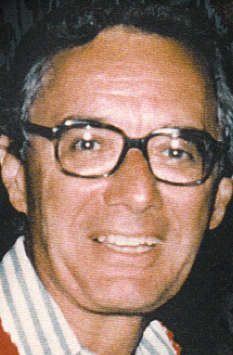 Maybe I'm wrong but....above is a picture of Jim Warren when he was younger from the Official Warren Publishing Website. What do you think?
Posted by Booksteve at 12:39 AM