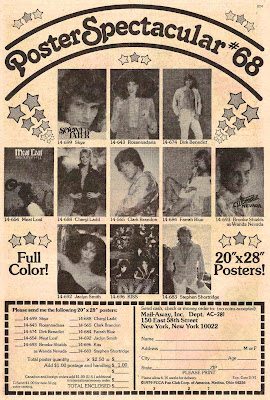 As the seventies ended, you were nobody unless you had a poster. It all started with Farrah a few years earlier and then, as with most good things, it got run into the ground. This ad, apparently this company's 68th, was from 1979. Let's take a look, shall we?
First we have Rex Smith (later DAREDEVIL on TV) from a TV movie entitled SOONER OR LATER that really wasn't THAT popular to begin with and certainly is little remembered today.
Roseanna Rosannadanna was Gilda Radner's SNL character which had peaked in popularity a year or two earlier.
Dirk Benedict here was nearing the end of his BATTLESTAR: GALACTICA fame and sttill a few years away from THE A TEAM.
Meat Loaf's BAT OUT OF HELL poster by Richard Corben did as much to sell that album as its music did and the image is still popular today.
Chery Ladd was a lovely young woman. Cheryl followed Farrah on CHARLIE'S ANGELS so it was natural to try to market her the same way but for some reason, Cheryl Ladd without pants still looked too wholesome to be a huge seller.
Clark Brandon. Seriously. Do you know who Clark Brandon is? I do and I still barely remember him. Hard to believe anyone had his posters on their wall. He had a consistent 7 year run as a teen, mostly on TV, between 1973 and 1983.
Farrah (Blue). For some people, you could never get enough Farrah. Even though her super-popularity was settling down by this point, this huge, beautiful poster was still a big seller. I still have this one.
Brooke Shields as Wanda Nevada. WANDA NEVADA was an attempt at selling young teen Brooke as something other than a young teenage sex symbol after PRETTY BABY but it didn't work. Soon enough she was back in BLUE LAGOON and ENDLESS LOVE and it would be years before she got any respect as an actress and comedienne. If anything, if the film is remembered at all, it's because it's the only time Peter Fonda and his dad Henry appeared in the same picture.
Jaclyn Smith was and is a lovely woman who is so classy that, again, that "sexy" thing that Farrah could do effortlessly just kind of looked silly to me when she tried it. I did buy this one though.
Kiss, of course, is a marketing dream and I'm sure this was probably the biggest selling poster on this ad!
Finally, we have Stephen Shortridge! And you thought Clark Brandon was obscure! Mr. Shortridge had the unenviable task of replacing John Travolta on TV's WELCOME BACK KOTTER after the feature SATURDAY NIGHT FEVER made him the biggest star in the country overnight. To make matters worse, the producers hedged their bets by keeping Travolta's character around in cameo appearances anyway which prevented Shortridge from ever being fully accepted as a sweathog.
Posted by Booksteve at 9:43 PM