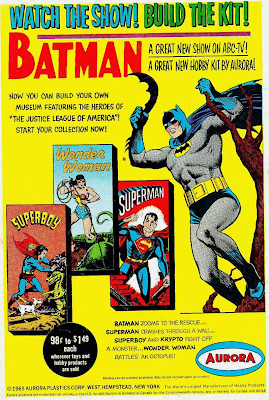 One of the earliest tie-ins to the 1966 BATMAN TV series was this now-iconic Batman model from Aurora. These classic DC character models were out in late 1965 and have been reissued from time to time over the years since. I had the Batman one and later the Superman one. Somewhere I have a photo of myself with the assembled but unpainted Batman model.
Posted by Booksteve at 5:53 PM