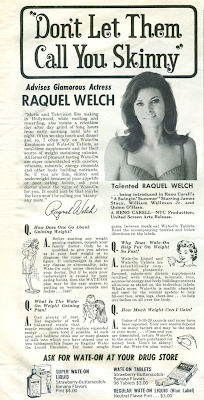 Why are so many women of a certain age overweight in this country? Perhaps because they were led to believe by this 1965 ad that they could look like "glamorous actress" Raquel Welch (whose first real film was just then being released) if they put a little weight on...or "Wate-On."
Posted by Booksteve at 8:02 AM