The Ballad of John and Yoko 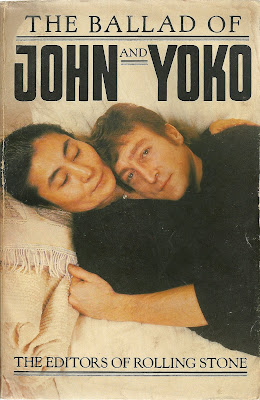 As is being widely covered in the news today, October 9th is birthday to both John Lennon and son Sean. John Lennon, one of THE pivotal figures of the late 20th century, would have been 70 years old had he not ascended into legend far too soon.
As has been noted here many times, we have nearly a whole bookcase of Beatles-related books here at the Library. One of my favorites of the many on John is the ROLLING STONE compilation entitled THE BALLAD OF JOHN AND YOKO.
THE BALLAD OF JOHN AND YOKO came out in 1982 and collected most (or perhaps all) of that venerable rock magazine's many articles, reviews and interviews with the former Chief Beatle. There are also a few new remembrances and a collection of color stills from Annie Leibovitz's award-winning final photo session.
My main issue with this naturally bittersweet volume is that there is little context given on the reprinted material. Since John would often change his views on everything from individual songs to political movements and certainly friends and enemies dependent on his involvement at any given time with certain substances or sycophantic advisors, it would have been nice to know where he was in his life when he was saying what he was saying in any given article.
Taken for what's there, though, as opposed to what isn't, one is left with a complex portrait of a complicated, conflicted man on a personal journey of discovery...and the very real feeling that he was coming out ahead in the end. Isn't that what we all want out of life, really?
Posted by Booksteve at 4:57 PM