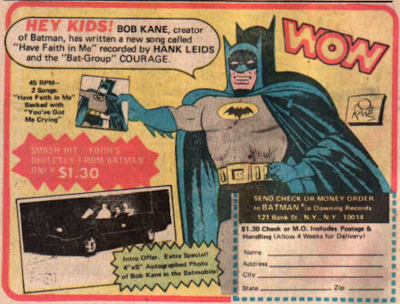 This mid-seventies record ad supposedly drawn by Bob Kane himself may well be one of the few times any actual Bob Kane art had appeared in a DC comic book since at the very least the 1950's...possibly since the '40's! Certainly, only one or two pinup style pieces by Batman's creator of record were all that appeared afterwards before his death in 1998. Thanks as ever to LM for pointing it out.
Posted by Booksteve at 1:27 AM