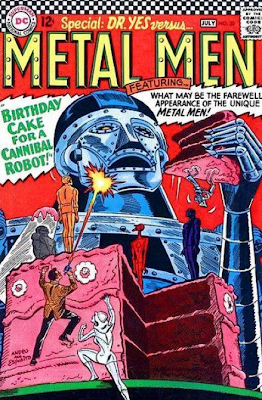 It's hard to discuss artist Mike Esposito without immediately mentioning or at least bringing to mind his longtime partnership with Ross Andru. As a team, the pair worked for various companies at various times and twice even tried to set up their own publishing company. I first discovered them at DC in the mid-sixties--the era of the infamous Go-Go checks--probably with this very issue of METAL MEN, my first. They had at that point been doing WONDER WOMAN for many years, also, as well as many one-off stories for DC's various war titles.
Esposito, working mostly as an inker most of the time, had also been picking up work at Marvel during that period under the assumed names, Mickey Demeo and Joe Gaudioso. In later years Mike would be a mainstay inker for Marvel under his own name and beyond that go on to be Art Director for Archie Comics.
By all accounts a nice man and a thorough professional. RIP
Posted by Booksteve at 5:31 PM