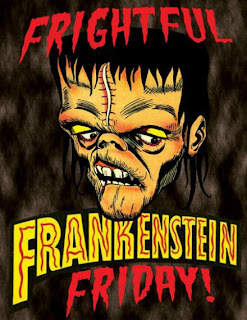 Tomorrow is FRIGHTFUL FRANKENSTEIN FRIDAY in celebration of the publication of Craig Yoe's newest collection of classic Golden Age comics, DICK BRIEFER'S FRANKENSTEIN. If you've never read any of these stories you are in for a revelation. The series was quite literally unique in the annals of comics. The first ever comic series to star a monster, Briefer--a former Eisner associate--did some genuinely creepy comics...at first. Then he switched gears completely and remade the monster a lovable creature in the manner later adapted for Herman Munster! These Jack Cole-style stories were fun and cleverly drawn but...later on, when horror comics were all the rage, Briefer switched BACK and did a serious version of the monster again in a series of stories that were several cuts above most of the horror comics of the fifties.
Check out the blogs below on Friday for a whole day of F R A N K E N S T E I N !!!!!! Then order your own copy of DICK BRIEFER'S FRANKENSTEIN for the behind the scenes story as well as many, many more reprinted stories from ALL the different eras!
And Everything Else Too

The Big Blog of Kids Comics

The Horrors of It All