The Many Loves of Dobie Gillis Ad 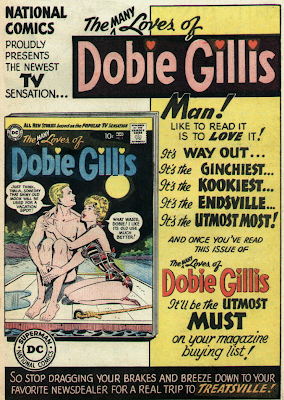 One of my favorite television series as a tiny child was THE MANY LOVES OF DOBIE GILLIS. I re-discovered it in reruns in the early 1980's and have seen it thusly a number of times since then and always enjoyed it. Clever writing, winning performances particularly from star Dwayne Hickman (with his Jack Benny-inspired delivery) and veteran Frank Faylen as his long-suffering but lovable dad. The breakout character from the show, though, was Maynard G. Krebs, Dobie's "good buddy." He was Dobie's Homer Brown, his Jughead Jones, his Arthur Fonzerelli! With his Beatnik schtick and catchphrases such as "You rang?" and "WORK!!??," Bob Denver's Maynard became as important as Dobie to the series. Thus he ended up playing a major role in National/DC's fairly successful comic book spin-off, much later retouched and redressed by original artist Bob Oksner (the originals being some of his best work in my opinion) as WINDY AND WILLY.
Posted by Booksteve at 9:36 PM