The Spirit by Don Rosa 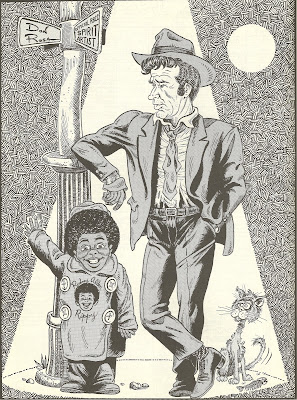 I have always loved this fanzine image of the movie version of Will Eisner's classic SPIRIT that might have been. Drawn for the RBCC (that's ROCKET'S BLAST-COMICOLLECTOR for you youngsters) by future modern day "Good Duck Artist," Don Rosa, this image accompanied an article/press release about EXORCIST director William Friedkin's announced intention to bring Denny Colt to the small screen in a TV movie. Rumors to that effect had abounded for several years as Friedkin readily admitted being influenced by Eisner's cinematic storytelling on his previous Oscar winner, THE FRENCH CONNECTION.
Keno Don Rosa (about whom there's a new feature length documentary coming soon!) was a BNF who had taken over Ray Miller's INFORMATION CENTER in RBCC and made it uniquely his own with his humor and his delightful pop culture illustrations (including, on occasion, Disney ducks!). Here Don shows actor James Garner as the Spirit with young hamburger salesman Rodney Allen Rippy as sidekick, Ebony.
Since the eponymous hero of the strip was known to be a handsome, quick-witted character who was as good with his lips as his fists, the dream casting the fans hoped for was James Garner as the Spirit. Garner had essentially played that role in his earlier hit TV series, MAVERICK (as well as many variations in movies and TV ever since).
Rodney Allen Rippy was only about eight years old at the time but was enjoying his fifteen minutes with regular TV appearances ranging from his star-making Jack-in-the-Box commercials to sitcoms to talk shows to award shows. He was too cute and too easygoing to be Ebony no matter how politically correct they tried to write him. Unfortunately, Gary Coleman--who could have been perfect at the right age--was only a few months older than Rodney at that time.
As stated in the piece, Friedkin would first have to shoot SORCERER. Although well received by critics, that film proved to be a major box-office disappointment and Friedkin's stock in Hollywood fell. THE SPIRIT went unmade and the property slipped into other hands. Finally, a few years later, a TV movie version did appear from other hands but Will Eisner was reportedly not thrilled. I don't know if they used the same script that Friedkin would have had or a new one but it was a campy throwback to BATMAN starring Sam Jones (later the campy big screen FLASH GORDON) and Nana Visitor (later of STAR TREK: DEEP SPACE NINE and now a friend on Facebook). It's enjoyable in a way but every once in a while even now--especially after Frank Miller's big-screen travesty--I can't help but imagine THE SPIRIT starring James Garner, directed by William Friedkin.
Posted by Booksteve at 8:21 PM