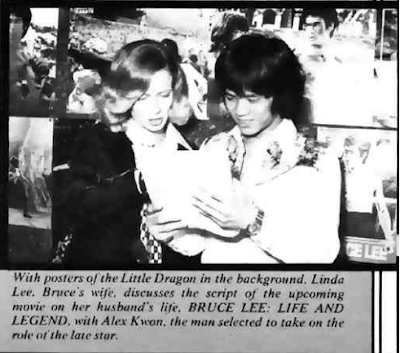 Bruce Lee would have been 70 this year. Almost immediately after his untimely death in July of 1973 he was elevated to superstar--and nearly Godlike--status throughout the world. Many years before the bio-flick DRAGON, we were all told to expect an authorized biographical picture to be entitled BRUCE LEE: LIFE AND LEGEND. Nothing ever came of it. Here, though, is a still of Bruce's widow Linda, supposedly perusing the script of that proposed film along with it's intended star, one Alex Kwon. Quite frankly, Alex looks a little too "gosh-wow" to have been Bruce but...who knows?
Posted by Booksteve at 5:57 PM