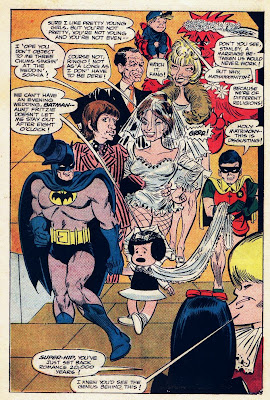 DC's long-running (nearly two decades!) ADVENTURES OF BOB HOPE title was not spared the company's understandable but shameless exploitation of Batman in 1966. Here, from issue 103, is a fun full pager featuring the Caped Crusader with Ernie Bushmiller's Nancy! Robin doesn't look too happy. Note also Sophia dissing the Fab Four to Ringo, Sinatra putting down Phyllis Diller and Stanley and his monster being kept apart from their forbidden love over religion.
The series at this point was usually drawn by Bob Oksner but this issue seems to be the work of Joe Orlando, then newly arrived at DC. This page, however...Comics creator Stephen DeStefano insists that the Dynamic Duo are by Carmine Infantino (then their regular artist). I can see that. Except that the celebrity caricatures look to me like the work of Mort Drucker, himself a longtime artist on the Bob Hope title. Stanley and his miscolored monster seem to be drawn by Oksner! Was this a jam page? Was Orlando imitating everyone's style? Was Carmine brought in to keep the Batman figures on-model. Does anyone out there have a clue?
Posted by Booksteve at 10:07 PM