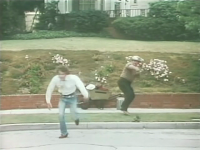 Attention trivia fans! What was Steve Martin's first movie? Off the top of your head, you'd probably say THE JERK. Made in 1979, that was most definitely the popular stand-up comic's first starring film role but did you know that the largely forgotten SGT. PEPPER'S LONELY HEARTS CLUB BAND (featuring Steve as the homicidal Maxwell Edison) appeared a year earlier in 1978? That's still not the answer we're looking for though!
Steve Martin, as most who care already know, was a writer and sometime on-camera player for the Smothers Brothers and their controversial TV variety show of the late sixties. In the early 1970's, Tom Smothers and Jonathan Haze produced a satirical political film called ANOTHER NICE MESS that was directed by another of the series' writers, Bob Einstein (later AKA Super Dave Osborne and brother of the funniest man alive, Albert Brooks!) It was an odd little picture to say the least and we wrote about it and how it had long since disappeared here http://booksteveslibrary.blogspot.com/2005/10/another-nice-mess.html 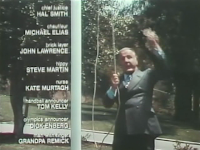 Well, the Internet being what it is, I finally today had a chance to see this forgotten little gem--and that's what it is, flaws and all--and who do I spot in one scene? STEVE MARTIN! Thus, contrary to what IMDB will tell you, Steve Martin's film debut was not in 1979 or even 1978...but way back in 1972, in ANOTHER NICE MESS!
Posted by Booksteve at 9:49 AM