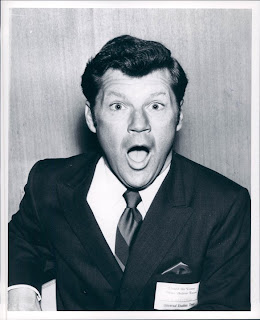 That's a much younger Bob Hastings over there on the right than the one scheduled to appear at the 24th Annual Greater Cincinnati Old Time Radio and Nostalgia Convention this Friday and Saturday. He'd appreciate the fact that he's on the right, though, as he always likes to say that when he appeared on ALL IN THE FAMILY semi-regularly as "Kelsey, the bartender," he was the "token conservative" on the series. In the past 24 years Bob has appeared as a guest (or in some cases THE guest) at the Cincinnati Con more than 15 times and is scheduled to appear onstage in a re-creation of one of the classic X MINUS ONE episodes in which he starred on 1950's radio.
If you're in the Greater Cincinnati area this Friday and Saturday, feel free to drop by the Crowne Plaza Hotel on Pfeiffer Road--a new venue this year. The Cincy Con--often described as more like a family reunion-- is like none you've ever experienced. If you're on Facebook look up the Con's page there for more details. Hope to see you there!
Posted by Booksteve at 5:30 PM