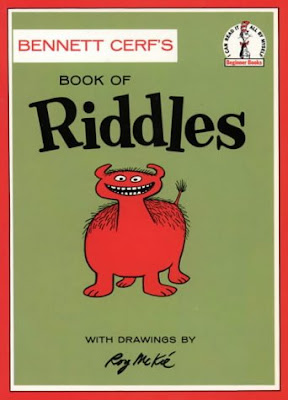 This was the earliest book I remember actually owning. I received it as a birthday gift for my 5th birthday. I, of course, had absolutely no idea who Bennett Cerf might be but I came to associate the name with funny wordplay.
In the years that followed, I learned that Bennett Cerf had also written a newspaper column of amusing celebrity anecdotes for many years and that many of these were collected in multiple volumes of hilarious books. I found that he was a lifelong collector of all types of humor as well as a singularly important figure in the field of twentieth century publishing. As founder of Random House, he was associated with several of the major literary censorship fights as well as the man who gave Dr Seuss--already an entertaining author/artist-- his first great push toward becoming a legend!
Add to that the fact that he was one of the regular panelists on WHAT'S MY LINE?, without a doubt the classiest, most entertaining and most civilized panel show of all time--as well as a favorite of mine from its mid-sixties final years through today where I watch episodes daily on YouTube!
He even had a marvelously entertaining posthumous autobiography entitled AT RANDOM!
BENNETT CERF'S BOOK OF RIDDLES! I may not be able to recall a single riddle at this late stage but I certainly recall Bennett Cerf. Who says books don't inspire?
Posted by Booksteve at 5:14 PM