Scenes from Day Two of the OTR Con/Bad news 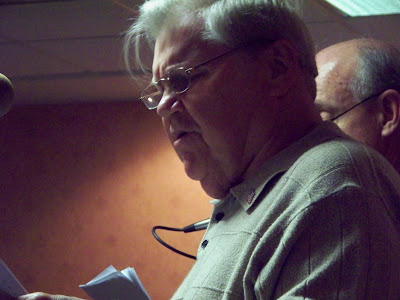 Bob Hastings on mike as an outlaw in GUNSMOKE, followed by Rosemary Rice waiting to go on as Miss Kitty 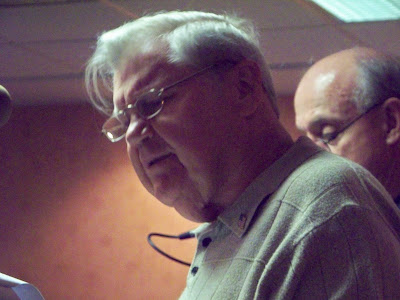 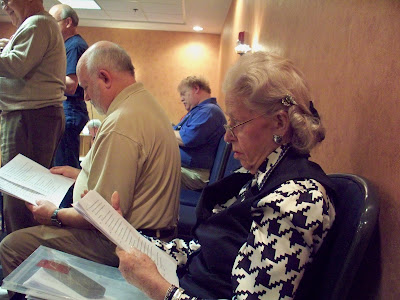 Brittany Rose and bookdave enjoying some downtime and Brittany Rose on mike rehearsing her gig as the announcer on OUR MISS BROOKS! 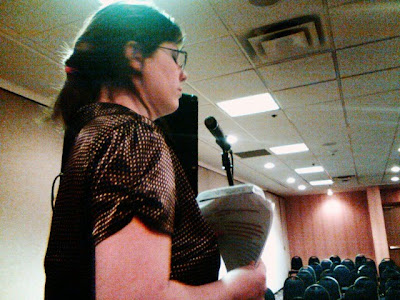 Unfortunately we returned home from a triumphant weekend to find a letter indicating that my wife's school contract would not be renewed so we are now BOTH unemployed!!!!!!
That, as you might suspect, was a real buzzkill to a day that also saw Rene portray a genealogist (type casting as she is one) in a lost episode script from a 1941 DUFFY'S TAVERN episode (in which I played Archie, da manager), a GUNSMOKE episode in which I managed to avoid playing "Doc" in the voice of Howard McNear's OTHER great character, Floyd the Barber and OUR MISS BROOKS in which I think I held my own with the pros reasonably well as squeaky-voiced teen, Walter Denton!
As always, any and all donations to this blog would be greatly appreciated. PayPal box is to your right at the top of the page. Sigh.
Posted by Booksteve at 7:54 AM