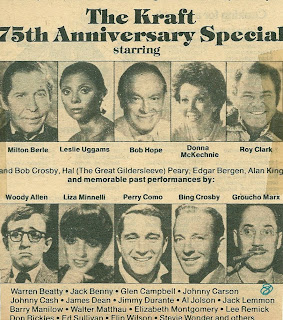 In keeping with this week's radio theme, here's an ad for the KRAFT 75TH ANNIVERSARY SPECIAL. Kraft was, of course, a big sponsor on radio back in the day when sponsors were practically as famous as (and certainly more powerful than) the stars! THE KRAFT MUSIC HALL was also a long-running favorite when television was young. Over the years Kraft several times presented salutes to themselves as radio specials well into the 1970's but this was a TV one. Note that even after all this time, along with Bob Crosby and Edgar Bergen (who died that same year), Kraft brought back Hal Peary as the Great Gildersleeve, their NBC character for more than 15 years. In the late forties when CBS famously raided NBC's top shows and performers, Peary quite logically followed Jack Benny, Amos 'N' Andy and others in signing with the upstart network only to find that sponsor Kraft was perfectly happy where they were at! Kraft refused to give up their claim to the Gildersleeve character that Peary had created and cultivated over a period of years on various shows, most notably FIBBER McGEE AND MOLLY. Thus it was that Peary soundalike Willard Waterman stepped into the role without missing a beat and continued for several more years on radio and eventually television for Kraft. Perhaps this special was Kraft's belated way of saying "No hard feelings" to Harold Peary.
Posted by Booksteve at 8:29 PM