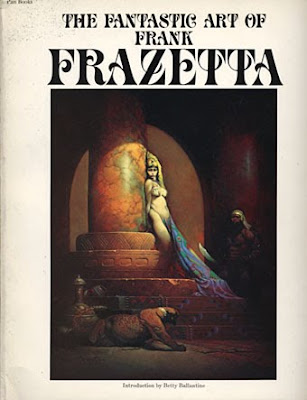 Frank Frazetta had already given up comics by the time I became aware of him. I saw his Conan paperback covers everywhere in the late sixties and early seventies and on occasion I would encounter him doing covers or illustrations for Warren magazines or NATIONAL LAMPOON. Even movie posters like Clint Eastwood's THE GAUNTLET.
What really introduced me to the truly beautiful style of Frazetta, though, were his five volumes in Ballantine's "Fantastic" series in the mid-seventies. THE FANTASTIC ART OF FRANK FRAZETTA collected paintings and sketches and treated him not like a comic book artist but like a "real" artist. He was respected in a way that Jack Kirby, Jeff Jones and Frank Miller--although they more than deserve it-- never would be; he was looked on as more than just an illustrator.
With his passing, undoubtedly all the seemingly sordid details of the problems of the artist's final years will emerge. Nothing, however, will take away the power and lush beauty of Frazetta's women, his lions, his ultimate macho men and his fantasy worlds! Rest in peace, sir, and thank you for sharing your imagination with us for so long!
Posted by Booksteve at 12:18 PM