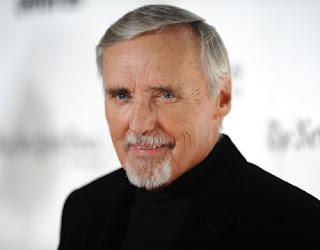 Dennis Hopper died today. His story was, of course, the very definition of a second act. Or was it a third? He first appeared onscreen at age 18 and was in smallish roles for many years before his career seemed to peter out in the heady days of the late sixties. But then came EASY RIDER and he was suddenly respected as an actor and a filmmaker....briefly. The disastrous reception to the money pit that was 1971's drug hazy THE LAST MOVIE was, along with projects like Hopper's participation in Orson Welles' unreleased THE OTHER SIDE OF THE WIND, enough to send him back to cameos and lower budget productions. Hollywood wrote him off...again. Then came David Lynch--the Quentin Tarantino of the eighties--and BLUE VELVET. This time, Hopper not only regained the respect of fickle Hollywood but he kept it. Thus his passing today finds this veteran film star of more than five decades leaving us not as a trivia question but as a star. Rest in peace, Dennis and thank you for your performances!
Posted by Booksteve at 1:22 PM