Other Than That, How Was the Play...? 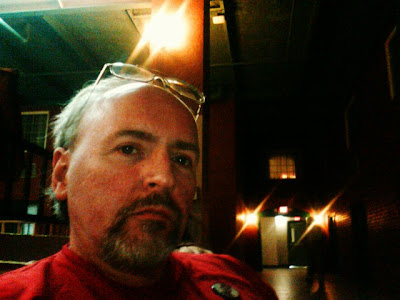 As usual in all of the various online and on-air reviews of this past weekend’s 24th Annual Cincinnati Old-Time Radio and Nostalgia Convention, the live re-creations of the old shows get dismissed with a terse, “Oh, and there were also some onstage re-creations.” Sigh. For many, myself included, the re-creations are a major highlight every year—especially these days when I can no longer afford to drop three or four hundred bucks in the dealers’ room!

In my case, the main reason I went back to the third Convention more than two decades back now was because my then girlfriend, Rene, and I, had been founding members of G.R.A.C.I.E.—the Golden Radio Association of Cincinnati: Imaginative Entertainment. G.R.A.C.I.E. performed radio re-creations onstage, on mike, with sound effects and all at various functions around town…none of which ever really appreciated us. But by the time we talked the Con into letting us add our re-creation to their already in place re-creations from the ad hoc Dave Warren Players, we had honed our single show into a well oiled machine!

We rehearsed RESULTS, INC.—adapted and directed by myself—at the Con that year with that year’s guest, Willard (THE GREAT GILDERSLEEVE) Waterman standing in for our absent announcer. It was a thrill. When we went on it was for our biggest and most appreciative audience to date. Although I have, throughout my entire life, been sometimes painfully shy, I relished those moments onstage!

Dave Warren liked our performance and drafted many of our members to also appear in his productions which, that year, were episodes of TOM MIX, DUFFY’S TAVERN, FRED ALLEN and a LET’S PRETEND version of “The Brave Little Tailor.” My wife played Mrs. Nussbaum in Allen’s Alley and my mother in the LET’S PRETEND! I played Jack, the title role! I was also cast as the acerbic Fred Allen and as Eddie, the waiter at Duffy’s. It was a thrill—a genuine thrill and I assumed it was all over at that point. G.R.A.C.I.E. dissolved amidst petty politics and we weren’t even sure we’d go back for the third convention.

In fact, when we did, we went as dealers, renting a table to sell stuff. When “Big Dave” Warren saw me behind the table, he chastised me for not being at the auditions and cast me in a small role in an ESCAPE with that year’s guest Parley Baer. That particular re-creation was directed by Bob Hastings, who would become a fixture of the Con in future years. Dave also made me promise to audition for more parts the following year!

And I did. That next year I played Homer to Ezra Stone’s HENRY ALDRICH as directed by Donald Ramlow who would become our regular director to this day. The following year was the first of two turns as Jughead to Bob’s ARCHIE ANDREWS. Over the years my wife and I literally became the repertory company. She played, amongst others, mothers, daughters, witches, a fake medium, a monster, announcers, and, in a matter of obvious typecasting this year, a geneaologist.

Every year I felt my moment must surely have passed but every year I was cast in at least a small role with a scene-stealer every once in awhile! I’ve played a dog, a frog, a ghost, a talking crow, an intelligent mouse, a robot, a cowboy, an alien, a number of teenage boys, a few old codgers, mobsters, a wisecracking photographer, a druggist, a detective, and a dozen others!

Along the way, we’ve made friends with so many of the folks who attend more or less every year—Dan, Kathy and the delightful Karen Hughes, Meredith Grainger, Derek Tague, Steve and Laura Jansen, Ken Borden and others. Besides those guests I’ve already mentioned, we’ve had a chance to work with Rosemary Rice, Hal Stone, Herb Ellis, Lon Clark, Will Hutchins, Tyler McVay, Esther Geddes and more veterans of old-time radio and TV.

Rene continually got parts, our son David began to get small roles and even unofficial goddaughter Bree, whom we first brought in 2008, auditioned and won roles. A few years ago, Rene and I even won the dave Warren Award, named after the now-late director who made me promise to keep auditioning!

Last year, I got only two small roles and, having had a notable change in my speech due to the necessity of having two teeth removed in November of 2008, I figured it perhaps best that I be relegated to small character parts.

At this year’s convention, however, there were four shows…and I was given major roles in three of them, all of which were to be done on Saturday! First rehearsal was at 10 AM, second at 11. First show was at 1:00 and second at 1:30. Third rehearsal was at 3:30 for the Saturday evening performance.

I was onstage for the first rehearsal when Bob Hastings came walking in. He saw me and said, “Well, there’s Jughead so everything’s going to be just fine.”

In a lost DUFFY’S TAVERN script painstakingly transcribed and adapted by the sadly absent Derek Tague, I had, after two decades, finally graduated from waiter to manager as I played Archie, the lead role. In my best Bugs Bunny accent, I led the cast through a tale of Archie’s greedy attempt at hoodwinking a society dame by faking a phony pedigree. I haven’t seen the video yet but Bree got the first half before her battery died and she said everyone loved the performance!

Next came GUNSMOKE with Bob as an outlaw and Rosemary (I REMEMBER MAMA) Rice as Miss Kitty. I was Doc. When I tried to imitate the original voice actor, Howard McNear, I couldn’t seem to avoid drifting into Floyd the Barber from THE ANDY GRIFFITH SHOW, one of his other great creations. This was made worse by the fact that there were barber jokes in the script! So I did it as more a grumpy old, DeForrest Kelly type. “Dammit, Chester, I’m a doctor not a barber!” Director Ramlow said he really liked the voice.

Finally, for the evening performance, they saved the best of this year’s scripts—a funny episode of the 1950’s radio sitcom classic, OUR MISS BROOKS. Rosemary was the title character, Esther Geddes McVay was her landlady and Bob was Mr. Conklin, the school principal. Karen Hughes was Bob’s character’s daughter and I was 16 year old, squeaky voiced Walter Denton, a role originated by a young Richard Crenna (arguably THE most successful actor to come out of radio). In all modesty, I believe I stole the show. “You nailed Walter!” someone yelled afterwards and a number of folks wanted to shake my hand or pat me on the back as I left the stage. It felt good. Once a year that shy little kid still in me is somebody for just a few short minutes….even if that somebody is quite literally not me!

And all the reviews just rave about this year’s convention—the great new hotel, the friendly crowd, the great deals and dealers…oh…and there were also a few re-creations. Yes. Yes there were…and for some of us, THAT’s what we remember most over the years—not so much the brief moments of adulation but the chance to play. I don’t do “fun” well. Never have, sadly. I’m 51 this year and my wife is 48. Karen is 25 and Bree is 27. Bob Hastings is 85. Esther Geddes McVay is about to turn 93! And this weekend we all played together and boy, did we have fun!

Posted by Booksteve at 6:02 PM