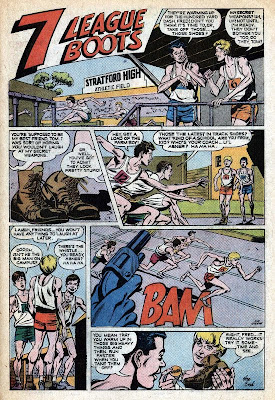 Actually, other than filler, I'm not sure what this is. It's a one page piece that ran in the back of the final issue of THE HAWK AND THE DOVE back in mid-1969 extolling the virtues of warming up in old boots prior to actually hitting the track. I....guess....that was a public service announcement...for somebody. Of course, it could also be taken as a "Don't make fun of the country boy, you crazy city kids, because he has wise ways." kind of thing. I dunno. Anyway, some rare late period solo art by Sid Greene, by then best known for his inking on Gil Kane's pencils.
Posted by Booksteve at 1:56 PM