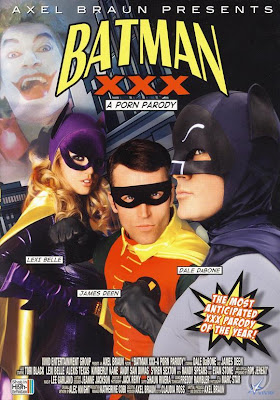 Whether or not you're into this sort of thing, seeing this box one HAS to admit they've certainly made a sincere effort to capture the visual aspects of the original 1966 BATMAN TV series. In fact, my favorite aspect is the Joker having a mustache beneath his greasepaint! Talk about paying attention to detail! The video is just out and I read last week where SUPERMANXXX is next!
In a bizarre but understandable reversal of form, the video comes with a version of the film with all of the sex scenes edited out! In the past, some films have edited out the "plot" parts for those who just want to see what they were paying for!
Posted by Booksteve at 6:56 AM