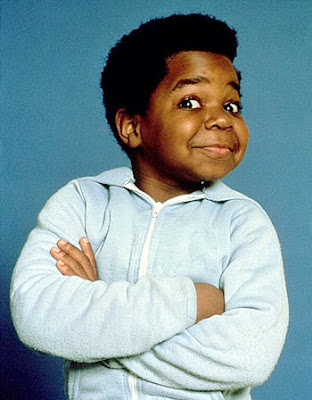 As the Classic TV Preservation Society's Person of the Week this week, I felt an obligation to say something on the death of Gary Coleman and what we do to older stars. This was originally posted earlier today on Facebook.

The passing of Gary Coleman earlier today drives home yet again the sad fact that we all tend to prefer puppies and wish the older dogs would just go away. Oh, we don’t do it on purpose. We don’t mean to simply put our old friends out to pasture…but we do it anyway. Over and over and over.

I first saw Gary Coleman on Norman Lear’s spoof talk show series AMERICA 2 NIGHT. At age 10 but looking even younger due to what we would all later find out was a physical disorder, he was cute and he was funny so, of course, he ended up with his own TV series.

DIFF’RENT STROKES came along at a time when sitcoms had become “relevant” to their times, often featuring episodes about modern day problems. In a way, it was an updated version of the sixties CBS series, FAMILY AFFAIR in that a middle-aged single white man ended up raising three kids with the help of his servant. In this case, the twist was that two of the kids were African-American.

Episodes dealt with abuse, drugs, sex, and, of course, racism. The writing and direction were often heavy-handed but the characters were endearing and the show settled in for a long and popular run. The children all attracted fans of all ages. For eight seasons on two networks, DIFF’RENT STROKES was their life. Then, as with all TV series, it ended. The adults moved on to other jobs and the kids were more or less left to their own devices.

Almost immediately, Dana Plato became the poster child for child actor issues and they eventually led to her suicide. Todd Bridges had anger and drug issues and legal problems that dragged him down for years. Gary Coleman spent two decades dealing very publically with family problems, health issues and the ever-present and undeniable fact that he was no longer that impossibly cute little kid the world loved.

And that’s just it. It isn’t only child stars. It’s older stars in general. For every William Shatner and David McCallum who makes a comeback, there’s a Ken Berry or a Mike Conners that everyone thinks must surely be dead or else they’d be on TV. When was the last time you saw Chad Everett or Stefanie Powers? Will Hutchins or Georgia Engel? Based on the reception these stars always get when they show up at any event whatsoever, I’m going to go out on a limb and say it’s the people running what passes for Hollywood these days who neither know nor have the least amount of respect for their own history.

Earlier this month I had the chance to work onstage with Bob Hastings and Rosemary Rice. Hastings appeared regularly on McHALE’S NAVY and semi-regularly on ALL IN THE FAMILY. He can also be found guest-starring in scores of TV series and films from the sixties through the eighties. At 85, he is healthy, sharp and reliable and yet his last on-camera appearance was 18 years ago. Ms. Rice, still a wonderful actress and a popular TV star of the 1950’s on the long-running series, MAMA, hasn’t appeared on camera in 50 years!

So younger stars are eaten up and spit out by the system while older stars are simply ignored after a time no matter how big their fan base. Ask yourself, were you really that enamored with Arnold on DIFF’RENT STROKES or was it what Gary Coleman brought to the role? Why is it that all of these big budget, big screen remakes of old TV shows always seem to be missing something? Was it really Sgt Bilko that was such a great character or was it that Bilko—as played by Phil Silvers—was such a great character?

I believe that Hollywood itself typecasts performers more than the fans. I believe that if given the chance the fans would relish the chance to see their old friends in new roles and not just cameos and tributes. Betty White’s current success is NOT a fluke! There are a hundred other beloved TV actors and actresses of all ages out there who would be welcomed back on our screens—big or small—if only they were given a chance!

We talk about preserving classic TV but that shouldn’t mean just the shows. We also owe a debt to the people who brought us those shows. Let this be a wake-up call. Find out today which of your favorite TV stars of old have an official website. Many of them do! At the very least write and thank them for what they’ve shared with us over the years. In the past year I’ve written to Wendell Burton (Charlie Brown on a memorable Hallmark Hall of Fame live action special of the 1970’s), Bo Svenson (from the first season of HERE COME THE BRIDES), Kip King (from CHARLIE & CO.) and Donna Loren (SHINDIG) and I’ve heard back from every one. You’ll be surprised and they will appreciate hearing from you!

Posted by Booksteve at 8:04 PM