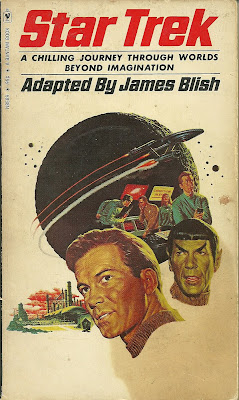 Unlike most things in my life, I have not the slightest recollection of when I first saw or heard of STAR TREK. It just wasn't that impressive to me. Today comes news that Leonard Nimoy is retiring--from Spock, from acting and even from personal appearances. He lived long, prospered, and now just wants to take it easy. Made me start thinking about STAR TREK.
There was something opposite it that first season that my family preferred but every once on awhile when whatever it was was in reruns, we ended up on the Enterprise. I know we saw all or parts of some episodes in the first two seasons but sadly, most of the ones I recall seeing first-run are from the less popular third season and include SPECTRE OF THE GUN and the dreaded SPOCK'S BRAIN!
I remember being sad when it went off in 1969 but by then I was used to the fact that nothing lasted forever (except--seemingly--GUNSMOKE and BONANZA). I moved on to the sixth grade and GODZILLA movies.
The first time I recall seeing syndicated reruns was around 1971 on a local UHF channel. This time I was hooked. I not only watched as many as I could but soon after I bought David Gerrold's two books--THE WORLD OF STAR TREK and THE TROUBLE WITH TRIBBLES. I even picked up a reissue of Gene Roddenberry's THE MAKING OF STAR TREK. Meanwhile, sci-fi author James Blish kept chugging along with his STAR TREK book series which essentially "novelized" episodes as short stories.
By 1975, when the reruns showed up again, this time on late-night TV, the cult was on. My first STAR TREK Con was Don Rosa's OMNICON in Louisville which was a Trek/Comics show featuring DeForest Kelly.
In the years since i actually attended more STAR TREK CONVENTIONS than I did comic book shows. I saw George Takei in Louisville, met Walter Koenig, Majel Barrett and Nichelle Nichols in Cincinnati and James Doohan in Northern Kentucky. Leonard Nimoy was announced as a guest at the next big Cincinnati Con at one point but that show never came off. I missed meeting William Shatner by mere minutes at the Cincinnati airport two years ago but by all accounts I should be glad I did.
George was great and very funny. Walter was just getting over his health issues but was quite pleasant. Nichelle had braved a blizzard to show up and was lovely and very gracious. Mr. Doohan allowed my wife to sit with him whilst he met with fans as she was temporarily in a wheelchair due to surgery. My wife was absolutely tongue-tied to meet Majel as Nurse Chapel had been her role model as a child so I did all the talking there.
If anything, my lovely bride was and is a bigger Trekkie/Trekker than I. She had all the same books I did as well as many of the novels when we married. We nearly missed our own wedding reception when we found out there was a TV marathon with STAR TREK cast members choosing their favorite episodes! And yes, she owns a full STAR TREK uniform. Doubt it would fit either of us anymore but it still hangs proudly in the closet. She even writes ST fanfic on the Net!
So as Leonard settles into what I hope will be a long and enjoyable retirement, I raise my hands in the Vulcan salute! Thank you, sir. Thank all of you! STAR TREK LIVES!
Posted by Booksteve at 10:25 AM