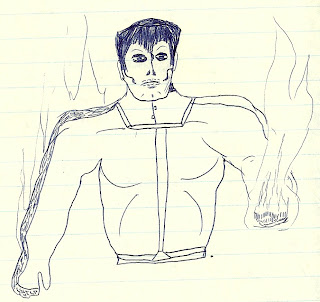 Every comics fan has a period where he creates his own superheroes. My friend Terry and I used to run around the alleys of our neighborhood having mock energy battles as Power Man and Atomic man or late

r on Delta Man and the Leopard. Then we'd go to our respective homes and draw mock comic book covers of our earth-shattering battles! I'd give mine to Terry the next day and he'd give his to me. That is, of course, why I have none of mine to share here at the Library. As for his, I apparently tras 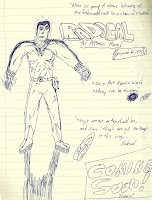 hed them or gave them back to him (and I haven't seen him in about fifteen years now).

By the mid-seventies, though, I was more into writing. I did horror stories, STAR TREK stories, a really sappy romance and more than twenty short detective stories about an amnesiac PI. I also wrote a well-received (by my English teacher) short sci-fi story called SITUATION SIX in which Abraham Lincoln turned out to be an evil dictator from the future and Booth the Time Agent sent to stop him from taking over 19th Century earth. 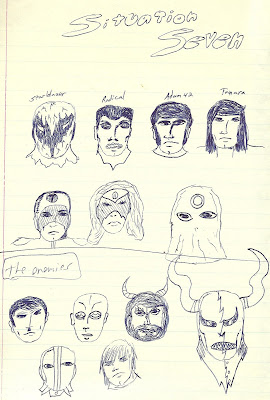 Amongst many unrealized concepts was RADICAL. I found the accompanying images seen here recently. As

I recall, RADICAL was to be a sci-fi tale about a guy with a similar problem to THE DOOM PATROL's Negative Man only in this case he was the only person who could save the world---if his very existence didn't cause the end of it first!
Clearly I went through several attempts at getting RADICAL off the ground in 1975 and 1976 (during none of which did I ever learn how to draw hands as you can see) before finally deciding to incorporate the character into SITUATION SEVEN, my ambitious sci-fi sequel!

Attempts to get THAT one off the ground floundered well into my senior year and while I have three completely different false starts here in the Library's archives, nothing ever really came of it.
For the record, SITUATION SEVEN would have dealt with a renegade Time Agent named STARBLAZER (well before the similarly named cartoon) who gathers the proverbial ragtag band of misfits to defeat a group of the most evil villains of all time lead by a universe-conquering alien masquerading as the embodiment of the human Devil! Radical would have been shoehorned in there somehow.
Posted by Booksteve at 5:38 PM