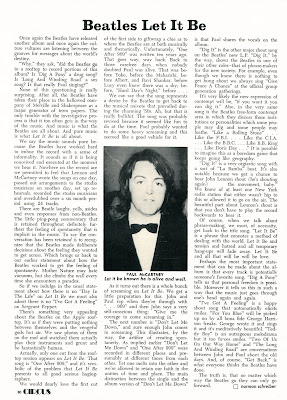 Here, from a 1970 issue of CIRCUS magazine, we have a fascinating review of the Beatles last released album, LET IT BE. It's fascinating for a number of reasons. First of all, it was published at a point just prior to the group breaking up. Second, it is clearly (by virtue of track order and the inclusion of TEDDY BOY) based on one of the early Glyn Johns mixes of the album that was leaked as a bootleg by unknown sources within Apple. Perhaps most interesting--to me at least--is how the reviewer concentrates on the songs that HE clearly feels will be the big ones off the album--the throwaway DIG IT (longer on this earlier mix but still rather pointless), DIG A PONY and I'VE GOT A FEELING. The real classics off the album--LET IT BE, THE LONG AND WINDING ROAD and GET BACK are tossed away in the review practically as filler.
By the time he gets to the bottom of the page, he closes with "...no matter which way the Beatles go they can only go forward." Never occurred to him that they could...and soon did...simply STOP.
Posted by Booksteve at 9:52 PM