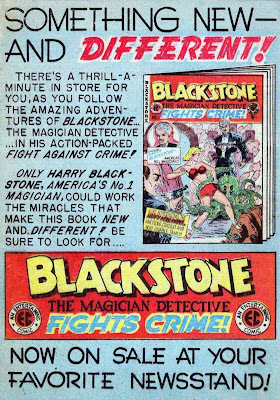 Magician heroes had always been popular in comics. From Mandrake and Zatara to Ibis and Sargon and the Wizard to all of the scores of wannabes, they had been a staple since the medium began. So someone got the bright idea to do a comic book based on real-life magician, Blackstone! It bounced through several publishers for several years starting in the mid-forties but was probably past its chance for any real success by then. Here's an ad for the first issue of EC's pre-Trend version--BLACKSTONE THE MAGICIAN DETECTIVE FIGHTS CRIME.
Posted by Booksteve at 4:19 PM