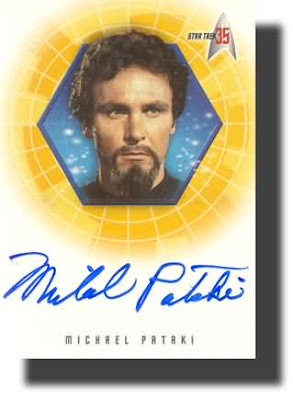 When a favorite actor passes away, it’s usually big news and always sad. When a favorite character actor dies, it’s equally sad only you don’t always hear about it at all. Such is the case with actor Michael Pataki who died more than a week back with the news only now trickling out.

Michael Pataki was “that guy!” You know, one of those actors whose name generally remains unknown to the public but who we see on darn near everything for decades. Thus, “that guy”…as in, “Hey look! It’s that guy!”

In my case, I think perhaps the first time I actually noticed him was in my favorite episode of one of my favorite series of the seventies—McCLOUD. He played Officer Rizzo in two of that series’ best episodes, THIS MUST BE THE ALAMO and THE DAY NEW YORK TURNED BLUE.

After that, I seemed to see him everywhere in new shows and in reruns. Going backwards, I would see him in reruns of BATMAN, THE FLYING NUN, BONANZA and—perhaps most significantly—in STAR TREK. In the latter, Pataki played the first Klingon in the TREK universe to speak that alien language in the classic episode, THE TROUBLE WITH TRIBBLES.

Going forward, Pataki had memorable turns in HAPPY DAYS, ALL IN THE FAMILY, THE AMAZING SPIDER-MAN and in WKRP IN CINCINNATI as the Russian defector who likes Elton John’s song TINY DANCER! 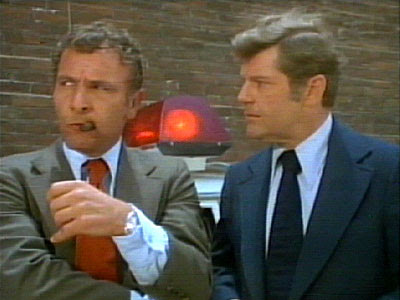 In the eighties, like many character actors, he turned

largely to voice-acting, appearing on Ralph Bakshi’s MIGHTY MOUSE THE NEW ADVENTURES and later Paul Dini’s BATMAN, DEXTER’S LABORATORY and EXTREME GHOSTBUSTERS. Eventually, Pataki became closely associated with John K when he did the voice of the disgusting character George Liquor in REN & STIMPY. He would later revive that role in various forms and formats including here on the Net.

Seen here is Michael Pataki in what was arguably his best known live-action role from STAR TREK and a scene from the seventies SPIDER-MAN showing him as a police detective alongside my friend Bob Hastings.

Posted by Booksteve at 7:22 AM