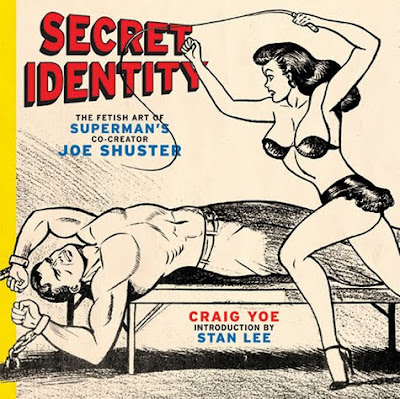 I went to the Eisner Awards once in 1988. It was all very predictable. Will Eisner himself, alongside Jack Kirby, was handing out the awards. I actually was sitting just two rows in front of Frank Miller and Bill Sienkewicz and they kept getting called up to accept.
This year, one of the few nominations I was sure of was that of Craig Yoe's SECRET IDENTITY: THE FETISH ART OF SUPERMAN'S CO-CREATOR JOE SHUSTER for "Best Comics-Related Book."

Not to slight any of this year’s Eisner nominees but in my opinion…Craig Yoe was robbed. Over the past year, the eccentric and existential Craig and I have become pals. As many of you know, I have even worked behind the scenes on some of his recent publications. I did not, however, have the slightest thing to do with Craig’s book SECRET IDENTITY which came out just as we became acquainted.

That said, did you read SECRET IDENTITY? I’m betting most of you did not and I’m not certain why that is. It offered for the first time new and somewhat scandalous information on Joe Shuster, the co-creator of SUPERMAN and a man without whom the comics industry may not have existed to this day. It was quite favorably reviewed and, in fact, reviewed IN more places than just about any other comics history related book to date.

In case you missed it, SECRET IDENTITY tells the story of Craig’s discovery that Shuster, after being ousted along with Jerry Siegel from National Comics over a dispute regarding Superman’s copyrights (and failing to make lightning strike again with FUNNYMAN), ended up drawing some little under-the-counter fetish magazines and—in spite of failing eyesight—turning out some of his best art in years.

The scandalous part lies not so much in the unexpected discovery that Shuster did these but in the fact that the magazines were cited in a 1950’s teenage murder case as an influencing factor.

Author Yoe presents all-new information and a behind the scenes look at the artist, the magazines and the murderers in a fascinating and oddly fun, fact-filled story but then, best of all, also reprints large size reproductions of much of Shuster’s newly uncovered artwork! Subject matter aside, most of it is little more than PG-13 in today’s society.

In that it uncovers a treasure trove of previously unknown, immediately controversial work by one of the backbones of the comics industry, SECRET IDENTITY is an important work in comics history and yet many comics shops chose not to carry it, many regular bookstores didn’t know where to merchandise it and many fans somehow missed it.

Maybe that’s why it was passed over for the Eisners? Not a good reason, mind you. I’m sorry. Again, with no disrespect to all of the deserving and deservedly nominated books and their creators, when it comes to SECRET IDENTITY and the Eisners…looks to me like Craig Yoe was robbed!