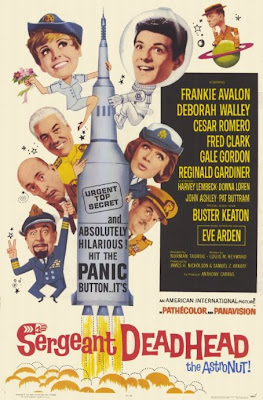 Until yesterday, I hadn't seen SERGEANT DEADHEAD since catching it on the Saturday Night Movie circa 1969. It is most definitely an odd bird, as the saying goes--or rather more precisely neither fish nor fowl.
After several years of the fun and successful BEACH PARTY films, it looks as though American International Pictures realized they couldn't last forever and made a concerted effort to morph them into a kind of naughty but Disneyfied Rock Hudson/Doris Day sex farce set on an Air Force base.
Held over from the beach are Frankie Avalon, Deborah Walley, Donna Loren (whom we interviewed here last summer!) and Buster Keaton. In cameo roles, we even get Harvey Lembeck, John Ashley, Bobbi Shaw and Dwayne Hickman.
New in this installment is a bigger contingent of familiar veterans--in this case a big bunch of scene stealing character actors including Fred Clark, Cesar Romero, the underused Reginald Gardiner, and, in an OUR MISS BROOKS reunion of sorts, Eve Arden and the great Gale Gordon! Oddly enough, co-star Deborah Walley would soon go on to appear as Arden's daughter on the TV series, THE MOTHERS-IN-LAW.
As with the PILLOW TALK genre, SERGEANT DEADHEAD is more comedy than musical but there are a few standout numbers including a tour-de-force set piece for Eve Arden with the WAF girls and a lovely torch song showcase for Donna Loren (who actually has more to do in this film than just sing for a change!).
The plot? Not the point but okay. The always personable Frankie is a klutzy airman who accidentally gets shot into space and returns a more aggressive individual after somehow getting his brains mixed with those of his chimp co-astronaut. There. Did you really need to know that? There's also his meek double, a mixed-up wedding with virginal Walley, some explosions, lots of scene-chewing from the vets and a funny turn by--of all people--Pat Buttram as LBJ!
If anything, Frankie and Deborah may have even more chemistry than Frankie and Annette--certainly very different chemistry. They're a lot of fun to watch when they're together and she particularly plays well off him. Keaton has a few funny moments early on but then seems to disappear. The hilarious Lembeck is wasted here completely.
Strangely, SERGEANT DEADHEAD was directed by Oscar-winning director Norman Taurog who had long been associated with Martin and Lewis and was, at this time, doing many of Elvis Presley's films.
It's not a good film. The story is a mess and you never really care about any of the characters or even really get to know them. The ending is just there. That said, it is a FUN film for genre fans as well as fans of the old-timers. AIP was right in attempting the change...they just don't seem to have realized that the moment for the Day/Hudson style farces had also passed!
Catch the whole thing online for yourself at HULU: http://www.hulu.com/sergeant-deadhead
Posted by Booksteve at 9:29 AM