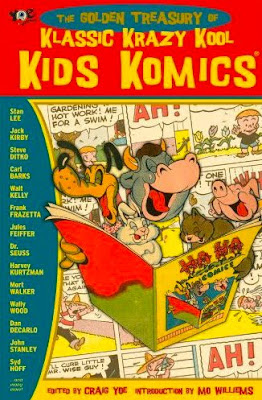 Let's be honest, you either like this kind of stuff or you don't. There was certainly a ton of it published back in the Golden Age of Comics so somebody liked it!
THE GOLDEN TREASURY OF KLASSIC KRAZY KIDS KOMICS is the latest book from the prolific comics historian and anthologist, Craig Yoe. By way of disclaimer, while my name is found in the credits in connection with the ITCH Blog, I had absolutely nothing to do with this collection.
And what a collection it is! Similar in format to last year's kids comics collection edited by Art Spiegelman, this one offers more of the same funny animal and humor comics fun but with the emphasis here on well-known creators you might not suspect of having done this type of work.
You have, of course, Golden Age work by Barks, Kelly and Stanley and others such as Dave Berg and Howie Post who specialized in humor comics. But would you believe not one but TWO 1950's Jack Kirby stories? Jules Feiffer? Harvey Kurtzman? Frazetta!!!???
Not everything is that old even! Steve Ditko's version of the giveaway BIG BOY restaurant comic (as hired by Craig himself) comes from the 1990's and Wally Wood's GOODY BUMPKIN has been a favorite of mine from the gi-NORM-ous WHAM-O GIANT COMICS of 1967 for four decades! It's amazingly hilarious to me even now...to say nothing of being some of Woody's best ever non-MAD humor art.
Children's book illustrators appear also including DANNY THE DINOSAUR's Syd Hoff and the legendary Dr. Seuss himself. The latter is represented with an early, oft-reprinted newspaper comic strip run that was never finished. In a fun bit of conceit, Yoe Studios has actually written and drawn a possible conclusion to the storyline after all of these years! And it's good!
As always with YoeBooks, the design of this thick volume itself is most impressive and will make it a nice addition to any collector's bookshelf physically as well as for its content. Whether you're a comics aficionado, an artist buff or just like funny stuff, THE GOLDEN TREASURY OF KLASSIC KRAZY KIDS KOMICS is a well-chosen anthology and well worth the price!
That said, thanks to Craig for arranging an advance copy for me. The book is due out this week!
Posted by Booksteve at 1:51 PM