Lennon and McCartney: Together Alone 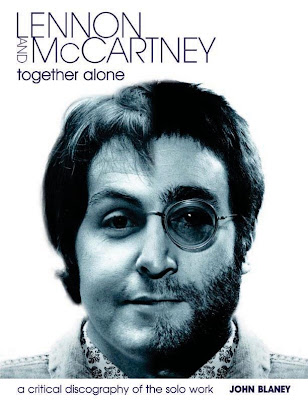 Another one of the books I picked up recently used was LENNON AND McCARTNEY: TOGETHER ALONE, subtitled "a critical discography of the solo work. The book's author is John Blaney, a man who knows his Beatles and has published several other books on them to prove that. The first thing that impacts one about this particular volume is its cover, a nicely photomanipulated image of Paul's face combined with John's. Sadly, that may be the best thing about the book.
Oh, now don't get me wrong. There's a ton of factual and critical information on every individual single and album ever put out by John or Paul including re-issues, re-packagings and remixes. Much of it is interesting and there are the occasional interview bits with this, that or the other of the musicians associated with the pair. No, the problem comes with the book (which features no illustrations to speak of by the way) and its overall concept.
You see, John Lennon is dead and has been for thirty years this year. That, by necessity, means that a book paralleling his solo career with that of his ex-songwriting partner becomes rather lopsided after 1980. Sir Paul regularly has released new material since then, expanding his musical horizons into realms such as classical compositions and experimental dance music.
Meanwhile, as you might surmise, Lennon's post 1980 output has been limited to unfinished takes, collections, soundtracks, etc....all featuring now thirty year old or more material. It can't be helped. Watching how Lennon's music evolved alongside McCartney's is fascinating...until it stops. Then you just have a book about McCartney...which I don't mind in and of itself except that that's NOT supposed to be THIS book.
In the end, I'd have to say what's here is fine for fans but don't expect any major insights.
Posted by Booksteve at 10:08 AM