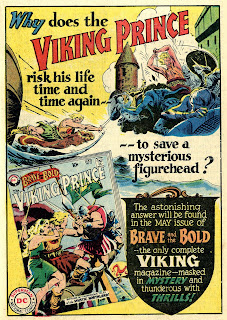 If you've been following the comments, you'll all know that we solved the riddle of the paperback cover mysyery for Robby Reed and Chris Noel (thanks for the shoutout, Chris!). Turned out not to be a sword and sorcery cover at all but a Viking cover! WEST WITH THE VIKINGS to be exact. Sometimes it's hard to remember that Vikings were as popular as elephant jokes back in the day! In movies like THE VIKINGS and VIKING WOMEN VERSUS THE SEA SERPENT but also in comics! That brings us to this full page ad for DC's BRAVE AND THE BOLD strip, THE VIKING PRINCE! The cover looks a tad wonkyin the ad because it was one of those nifty Idon'tknowwhatchacallem fancied up semi-realistic covers that DC slapped on SEA DEVILS, GREEN LANTERN and a few others around that time. VIKING PRINCE was given a valiant try and a number of nostalgic revivals but never really caught on before the Viking trend faded into the background to make room for the Beatniks, spies, Japanese monsters, surfing and the British Invasion.
Posted by Booksteve at 10:41 PM