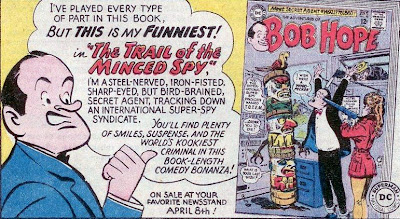 Just finishing up a Bob Hope movie on TCM that I'd never seen before--RHYTHM ROMANCE. Long since retitled on television from its original SOME LIKE IT HOT ( for obvious reasons). It's short, fast-paced, funny and with a bunch of swell familiar character actors like Rufe Davis and hometown girl Una Merkel. For some reason, though, it reminded me of THE ADVENTURES OF BOB HOPE comic book that DC published for nearly two decades. That brought to mind this mid-sixties ad for same and made me wonder if they had to pay Bob extra for having his cartoon doppelganger plug the comic in the ad! Although it wouldn't surprise me to find out he'd never read a single issue, Hope reportedly kept a mint condition set!
Posted by Booksteve at 8:57 PM