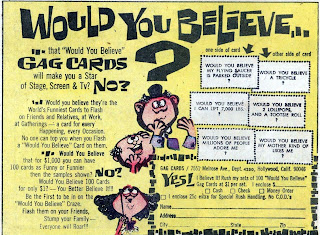 As GET SMART—in spite of lukewarm reviews—proves itself a comedy hit this summer, let’s revisit the era of the original TV series (as we often do around here). Just how popular was GET SMART in the mid-sixties? Well, it may not have been as popular as BATMAN but it was enough to spawn this undoubtedly unofficial spin-off—"Would You Believe…? Cards." Exploiting one of Max’s (and Don Adams’) signature bits, here we have someone attempting to make a quick buck off of GET SMART without having to license a darn thing! Of course, nowadays, Don could have probably sued for intellectual property theft.
Posted by Booksteve at 9:07 AM