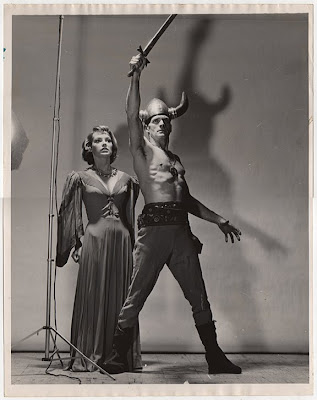 Mark Evanier always says that whenever he has a question all he has to do is post about it on his site and the answers pour in immediately. Well, I don't have his readership but I know I can count on you guys! Loyal reader (I'm not worthy!) Robby Reed of DIAL B for BLOG - THE WORLD'S GREATEST COMIC BLOGAZINE, is looking to identify the book cover for which this picture was shot as reference. If you know right off the top of your head, please post the answer. If not, please feel free to repost on your own blogs until we find someone who does!
Here's what we know:
The girl is Chris Noel, a 1960's starlet and later a favorite with our boys overseas. IMDB says she was born in 1941. By the mid-'60's she was working steadily in film and TV so that would seem to date this to the early part of the decade. Hard to tell as she played one for so long but she could still be a real teenager here.
The man is Steve Holland, TV's FLASH GORDON in the early fifties and later a successful male model for many years known best as James Bama's model for DOC SAVAGE in the sixties/seventies ( and even eighties by other artists) reprints. Holland continued modeling for romances, westerns and sci-fi covers until not long before his 1997 death and always looked good but here he looks like he probably would have in the late fifties/early sixties.
Obviously, it has a sword and sorcery feel but outside of CONAN, the real heyday of that type of paperback was in the early seventies. This definitely looks to predate that by at least a decade. Note, though, that it could concievably be for a romance cover!
I've scoured through old MEDIASCENES, sci-fi histories and mass market paperback cover collections as well as sites on Holland, S & S and various cover artists to no avail. I've got a bad toothache and I have to return to work at 4:30 AM so I thought I'd throw the ball to you guys! Have fun!
Posted by Booksteve at 9:27 PM