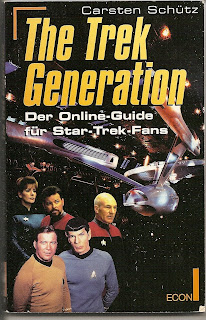 Not much to say about today’s book-off-the shelf mainly because it’s in German and I don’t read German. As a big STAR TREK fan, however, whose early internet excursions were often to TREK sites, I couldn’t let this 1997 guidebook pass.
It also, however, serves to illustrate the story of my near-miss of meeting William Shatner this past week. Yep, while I was off work last Tuesday and up way too early watching THE DOOMSDAY MACHINE on a Classic TREK rerun, little did I realize that Captain Kirk was boldly going to turn up at my job that day.
Sad to say, reports are that "the Shat" lived up to his reputation. Through the magic of security cams, I was able to see his brief "visit" in which he seemed to stay only until he was recognized. One employee followed him out and asked if she could ask him for his autograph and he reportedly replied, "If you must." He reluctantly signed after requesting the employee to block him so others wouldn’t see. A second employee came out and he refused to sign any more…politely, I’m told.
On the security cam, he was seen to be wearing an outrageously loud Hawaiian type shirt with a matching floppy hat—not exactly the kind of thing you wear if you don’t want to be noticed.
I had one friend who once told me that Shatner was amazingly nice to her and showed me a twenty minute video of her encounter as shot by her sister. I pointed out that of course he WOULD be nice to her cuz’ she was getting it all on tape!!!!
Over the decades I’ve met George Takai, Walter Koenig, Nichelle Nichols, DeForrest Kelly, James Doohan, and most of the STTNG cast and every one of them has been just wonderful.
In recent months, some of the celebs who’ve wandered through my store include Mary Matalin (very nice), Tony Shaloub (very tired but friendly), Ron Jeremy (impressive as all get out), Nick Lachey (extremely friendly) and Vanessa Manillo (a little curt but very pretty!) so I can’t complain that I’m never there when the famous folk wander through. Still, I know William Shatner’s not into all the fan worship so I doubt I would’ve expected anything else. Would have been nice to have seen one of my long-time heroes, though, if only for a second.
Posted by Booksteve at 10:37 AM