The Return of Ambush Bug 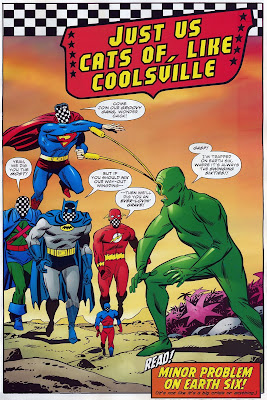 Well, I wasn't able to blog on Tuesday because I had to go straight from my Aunt's funeral to work. I had every intention of blogging last evening as soon as I returned from same but MY FREAKING CAR BROKE DOWN AGAIN!!!!!! Didn't get in 'til well after Midnight and the car is now back in the shop for the fourth...fifth? time since Thanksgiving! The one bright spot in recent hours that's really made me smile has been the new AMBUSH BUG comic! That's right. After all these years, someone has let the original Bug-team of Keith Giffen and Robert Loren Fleming out of their cages for some of the sharpest comics commentary this side of Fred Hembeck! Not to mention the arcane and obscure silver age references and bizarre "revelations" such as the fact that the original Bat-Girl was the love child of Sue Dibny and the Phantom Stranger!!! Me, I just want to read a whole line of comics set on Earth 6 where it's always the swingin' sixties! (Love those go-go checks!) DC silver age fans who don't mind a bit of learned deconstruction need to go buy this comic now!
Posted by Booksteve at 8:51 AM