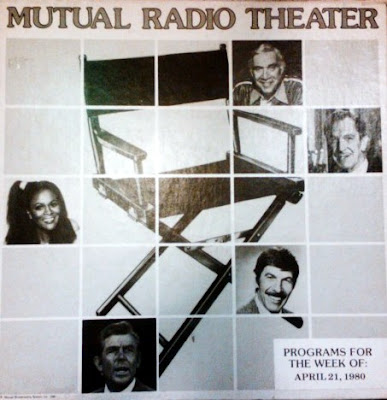 Barney Beck, the great radio sound effects man, once told me that I’d missed my calling and had I been born a few decades earlier, I could have been big in radio. While this was undeniably a great compliment, it also serves to play up the fact that radio…even dramatic radio, is not what it used to be!
Every time some well-meaning folks have decided to try dramatic radio since the early sixties, it hasn’t quite worked. It’s hard to put your finger on why but in spite of the enthusiasm and occasional technical expertise that far surpassed that of the "golden age," modern age radio dramas and comedies just seem to be missing that magic.
THEATER FIVE in 1965 came close with Fred Foy announcing and lots of veterans on air and behind the scenes but it still—starting with its oh-so-sixties theme music—missed the mark. Himan Brown’s mid-seventies CBS RADIO MYSTERY THEATER hosted by EG Marshall was enjoyable and I often put it on late at night as I was discovering OTR but it still seemed slow and often dull by comparison. BRADBURY 13 was wonderful but still seems kind of sterile. The same with Carl 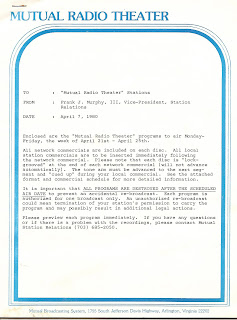 Amari’s recent radio TWILIGHT ZONE. The Canadian NIGHTFALL was adult, gory fun and may be the best of the lot but even it can be slow going at times.
Various one-off productions over the years have made the same mistakes, taking months sometimes to write, produce and perform a dull one hour radio play that forty years earlier would have gone from concept to air in less than a week and been better paced and more enjoyable. Even Canada and the BBC, where the concept of dramatic radio never really died off, often turn out the most boring pieces! Have you ever tried to listen to one of the BBC’s interminable DOCTOR WHO radio serials of recent years? How do you make DOCTOR WHO seem dull?
Then we come to the MUTUAL RADIO THEATER. The most potential and yet one of the biggest offenders of all. Like most of the latter-day attempts, MRT was an anthology series but this five day a week series offered a different genre and a different celebrity host for every night of the week.
Monday was Western night hosted by BONANZA’s Lorne Greene (himself a veteran of Canadian radio). Tuesday was Comedy night presented by Andy Griffith. On Wednesday, Vincent Price—a radio man from way back—offered Mystery. Thursday featured Cicely Tyson with Romance and Friday perhaps incongruously offered Leonard (I AM NOT SPOCK) Nimoy with Adventure night.
An immediate inherent fault in this format was the fact that if you liked mysteries and adventures, you would only listen on Wednesdays and Fridays. If you only wanted a few laughs, you’d only tune in on Tuesday. Since listening to radio in the evenings was hardly a regular habit for most folks by 1980, more than likely you wouldn’t even

remember from week to week.
It might have helped if the series had gotten listings, reviews or other publicity in newspapers but quite frankly if the MUTUAL RADIO THEATER even played in the Cincinnati market I was never aware of it.
Seen here is a box of LPs I picked up used in the mid-eighties and this was the first I had even heard of the series! As you can see by the notes that came with the box, the entire set was supposed to have been contractually destroyed "to avoid accidental rebroadcast" but somebody at some station chose to just sell them… at least for the week of April 21, 1980.
To say I was excited was putting it mildly but I have rarely been so disappointed. Take a look at the episode listings and you see the names of the legendary Arch Oboler, the great Elliot Lewis and one of the great rad 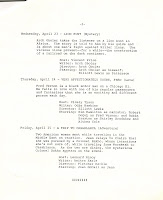 io writers, Fletcher Markle. Sigh. Maybe it’s just that "you can’t go home again" thing but even these great radio creators prove to be…here’s that word again…dull!
Add to that performances from folks such as Toni Tennille who just don’t have the right "vibe" for radio and each of these episodes comes across as a pointless attempt to recapture lightning in a bottle. The hosts, the truly big name celebrities, probably recorded all of their intros at once to be edited in as they often seem not to have even heard the episodes. Seriously, I’d bet Cicely Tyson in particular was a little too busy during that period to run to a Mutual studio once a week for just a few minutes work. Maybe Vinnie could squeeze it in between HOLLYWOOD SQUARES episodes but…
THE MUTUAL RADIO THEATER didn’t last very long. I hate to sound so cynical as I dearly love the amazing power of radio at its best and maybe it’s just me pining for what might have been but…sigh. I keep listening whenever there’s a new radio production but it’s hard to convince folks in this fast-paced world that this art form is actually one of the best because it all takes place in your own head. As I once wrote elsewhere, I’d hate to see dramatic radio go the way of Sanskrit to be studied only by scholars in dusty listening rooms.
Posted by Booksteve at 9:33 AM