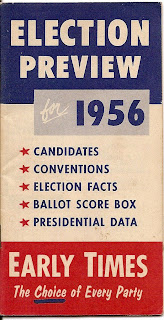 I really don’t know how this nifty little political booklet came to be in our collection but its 30 pages (sponsored by a brand of Kentucky whisky!) pack a wealth of trivia and information regarding the US and its presidents as well the then current conventions.
The pages seen here include the names of those deemed most likely at the time to become the presidential or vice-presidential candidates. You can click on the pages and read their bios up through mid-1956 but with the benefit of hindsight, let’s take a look at what happened to these one-time headline-making players.
First up:
THE DEMOCRATS
WILLIAM AVERELL HARRIMAN-a highly respected politician and statesman, Harriman was considered too left wing for the small town world of the mid fifties. His presidential aspirations dashed, he lost the governership of New York to Nelson Rockefeller in ’58. He went on to serve in various capacities in democratic administrations and died in 1986 at the age of 94.
LYNDON B. JOHNSON-LBJ didn’t get the nod in ’56 but in ’60 he would, of course, become the allegedly less than thrilled veep candidate under JFK. Succeeding Kennedy upon his assassination, 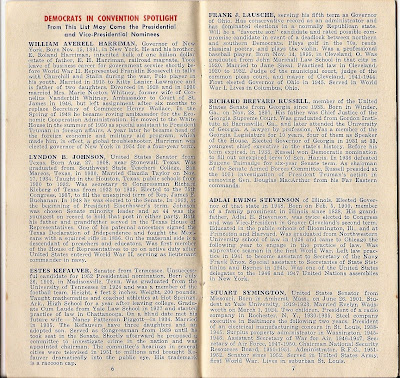 Johnson’s administration would see civil rights reforms and the escalation of the Vietnam War. The latter would cause him to give up any thoughts of reelection in 1968. He retired to his Texas ranch where he grew his hair out a little and looked silly before his death in 1973.
ESTES KEFAUVER-To comic book fans, Kefauver and his committees were as bad as Joe McCarthy! He was, however, a popular liberal chosen to run as vice-presidential candidate in ’56. After losing, he was looked at as a shoe-in for the 1960 nomination but declined to seek it. He had a massive heart attack on the Senate floor in 1962 and died a couple of days later.
FRANK J. LAUSCHE-a two term governor of Ohio, he went on to be elected to the Senate in 1956 where he stayed for more than a decade. A bit too conservative, he lost out in 1969. He died in 1990.
RICHARD BREVARD RUSSELL- A Senator for parts of 5 decades, he was one of several mentors to LBJ. He remained in the Senate until his death in 1971.
ADLAI STEVENSON-The thinking man’s politician. Dull but smarter than the average Bush, he was a perennial candidate but never quite got to the White House. In 1960 he did not seek the nomination but rather publicly hoped to be drafted. When JFK won the nomination, however, he was all for him, hoping to be named Secretary of State. Passed over for even that position, he became UN Ambassador until his 1965 death.
STUART SYMINGTON-He ran again in 1960 where he might well have been Kennedy’s choice for number two man if not for the fact that he refused to speak before segregated audiences in the South. He continued his public service in various and occasionally controversial roles. He died in 1988.
Posted by Booksteve at 9:08 PM