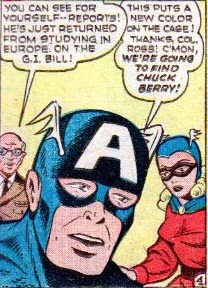 What would July 4th be here in the Us of A without baseball, hot dogs and...CAPTAIN AMERICA? Here, in art credited to Carl Burgos and Al Gabriele in GCD, is Cap from 1948's MARVEL MYSTERY COMICS #88. The girl with him is Bucky's little-known replacement (seriously!) Golden Girl (AKA the patriotically named Betsy Ross). Sometimes, as in this particular case, the panel may not have been all that weird in its original context but becomes weirder due to then-future events. In this case, Cap was searching for a missing soldier but...due to events of a decade later...seems now to be anxiously looking for his favorite singer--CHUCK BERRY!!!
Posted by Booksteve at 3:47 PM