Movies That Fell Through the Cracks # 41 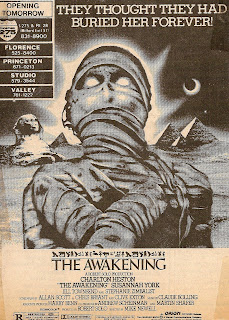 Yes, I'm sticking with the numbering, okay? Deal. Anyway, with Brendan Fraser dealing with mummies again this summer, I find myself reminded of this barely remembered 1980 nonsense starring the late NRA poster boy, Chuck Heston. THE AWAKENING sorta snuck into theaters as I recall with little publicity. Based on a story by DRACULA author Bram Stoker, Moses' return to Egypt some 25 years later proved to be a fairly dull affair. Billed and marketed as a traditional mummy movie with the great ad seen here, it's more a tale of reincarnation and/or posession as Heston's daughter (the wonderful but never has quite caught on to this day Stephanie Zimbalist) becomes one with an ancient evil queen. Long, dull stretches and soap opera level performances abound but few thrills and fewer chills. Maybe it's because of THE AWAKENING that it took another 19 years before mummies caught on again in pictures!
Posted by Booksteve at 4:49 PM