Return of the Pink Panther Ads 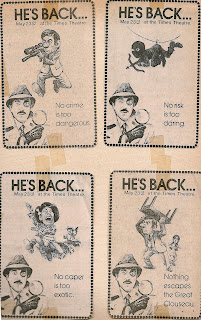 Was at the grocery last night with a young friend and she saw some cheap DVD's. Noting that they were bound two in a pckage for $5.00 each, she exclaimed something along the lines of , "Oooo! Look! Pink Panther! You like the Pink Panther, don't you?" Answering in the affirmative, I then attempted to explain to her that I could not buy that package at any price because of the bizarre pairing of the very early Clouseu film, A SHOT IN THE DARK with the very late Clouseu film, THE PINK PANTHER STRIKES AGAIN. She didn't get it. Another friend didn't get it awhile back when I explained that I could never buy the "definitive" box set that had come out because it didn't even include RETURN OF THE PINK PANTHER! How definitive is it if it leaves out the very film that re-launched Peter Sellers' career after years of ego-fueled stumbling through ridiculously inappropriate vehicles!?
In spite of the casting of suave Christopher Plummer in the role created by the equally suave (but in a totally different way) David Niven, RETURN was arguably the best of all 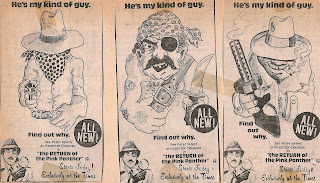 the sequels by virtue of having more actual plot and less silliness just for the sake of silliness. Don't get me wrong! I love all the Panther pictures made while Peter the Great was alive. I just prefer RETURN OF THE PINK PANTHER.
Here are a few of the newspaper teaser ads that ran leading up to the film's original 1975 debut. This practice was repeated with subsequent Panther movies, often with regional tie-ins. We'll run more in the future.
Posted by Booksteve at 6:38 PM