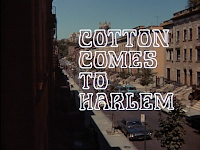 Far from fallen through the cracks but unjustly ignored for DVD release, here are two enjoyable seventies films from the Library’s collection—COTTON COMES TO HARLEM and COME BACK CHARLESTON BLUE. Made in 1970 and 1972 respectively, they aren’t exactly "blaxploitation" films and yet "Cotton" is often credited with starting that very genre. What they are, in fact, are two gritty, in your face old-fashioned crime pictures that just happen to have a Harlem setting. Oh, and did I mention that they’re also very funny? 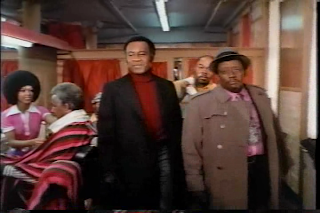 Based on the hard-boiled detective stories of author Chester Himes that date back to the 1930’s, both films feature his characters Gravedigger Jones and Coffin Ed Johnson. Now here’s the strange part. We learn little or nothing ABOUT these two—just their names and their general dispositions. As played by actor comedian Godfrey Cambridge and the tough but classy Raymond St. Jacques, though, the "Digger" and Ed have great on-screen chemistry.
The first film was written and directed by the late, great Ossie Davis (JFK in BUBBA HO-TEP!) and features the very charismatic Calvin Lockhart as a Harlem preacher collecting money from the locals that then disappears in a hail of gunfire. A bale of cotton falls from the getaway truck and becomes the mcguffin in the plot. Everyone is after it but local junk dealer Redd Foxx (presaging his SANFORD AND SON role in what is essentially his first film role) finds it only to disappear himself.
Judy Pace gives a solid performance that starts out as a sexy romp and ends up multi-layered with her as a abused woman. Other good seventies character actors appearing include Cleavon Little (BLAZING SADDLES), Eugene Roche (the dishwasher guy in commercials) and J.D. Cannon (McCLOUD’s "Chief"). Stage actor Dick Sabol is hilarious as a doofus white cop who gets tricke

d by just about everyone.
Add a perfect, surprisingly understated score and a marvelous and unexpected ending and COTTON COMES TO HARLEM comes up a winner all around. And to my way of thinking, COME BACK CHARLESTON BLUE is even better!
Made a couple years later and, with its drug theme, a bit edgier, this sequel deals with the rumored return of a legendary deceased gangster and how various characters in Harlem deal with the news. Wonderful Percy Rodrigues is added as the new police chief (since he always reminded me of St. Jacques, it’s strange to see them together!) and Minnie Gentry is lovely as "Her Majesty." Sabol and a few other supporting actors return making this look like a later episode of a POLICE STORY-style TV series.
Missing Davis’s sure direction, replacement Mark Warren (TV’s TURN ON!!!) does a good job, especially with the character sc

enes. Music here is by the ill-fated Donny Hathaway as supervised by the great Quincy Jones.
Both films focus on contemporary African-American issues but still make for compelling and fun viewing for those of any race. Gravedigger Jones and Coffin Ed Johnson turn up surprisingly halfway through the 1980’s movie A RAGE IN HARLEM also but played by lesser actors (Cambridge died in ‘75) and not offered as the major characters they are really rather superfluous. The shot locally film does, however, give the viewer at least an inkling of what they would be like set in the earlier decades of the ‘30’s, ‘40’s and ‘50’s as in the books rather then being transplanted whole into the ‘70’s as in Cotton and Charlston.
Finally, I’m on record elsewhere as saying that a good snow scene can make a movie. COME BACK CHARLESTON BLUE has a really nice snow scene!
Posted by Booksteve at 12:33 PM