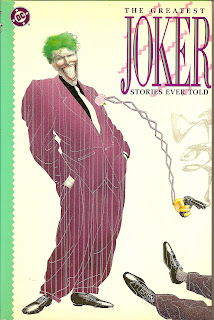 Stop me if you’ve heard this one before. I admit that I don’t pay too much attention to these things any more so for all I know this has just been reissued and you all have copies on your laps even as we speak.
What we have here is 1988’s THE GREATEST JOKER STORIES EVER TOLD in its original DC edition along with STACKED DECK, the expanded 1990 leather bound edition done exclusively for Waldenbooks by their publishing imprint, Longmeadow Press.
Kyle Baker (with whom I share mutual Facebook friends!) did the colorful original cover and Dean Motter the atmospheric remix. Denny O’Neil, longtime keeper of the Bat-flame (and novelizer of the current DARK KNIGHT) has an introduction in the fancy edition. Both copies feature the same intelligent overview by Mike Gold but the original has choicer illustrations.
As to the stories, both volumes offer a splendid mix from Golden Age to the (then) present, running the gamut from the genuinely evil early appearances through the silly-ass Joker of the mid-forties, the clownish, ineffectual nuisance of the fifties and early sixties to the downright scary serial killer as redefined by O'Neil and Neal Adams and Steve Englehart and Marshal Rogers.
Amongst a few other additions, the collectors’ version adds a story by the splen 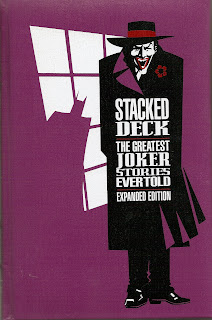 did team of Mike Barr/Alan Davis/Paul Neary/John Workman from a truly nifty run in DETECTIVE in which the Joker comes across decidedly gay on top of everything else, perhaps shading his long hatred of the Caped Crusader in ways never really dealt with before or since.
Finally, the big book has an afterword by Dick Giordano and both end a nicely written piece filling in the character's blanks by the very knowledgeable Mark Waid (who could be called the modern E. Nelson Bridwell).
Strangely, the upscale volume was remaindered and I picked it up for $2.99 around 1993! Longmeadow did a similar job with THE GREATEST BATMAN STORIES EVER TOLD, itself featuring some prime Joker appearances, too!
Posted by Booksteve at 8:47 PM