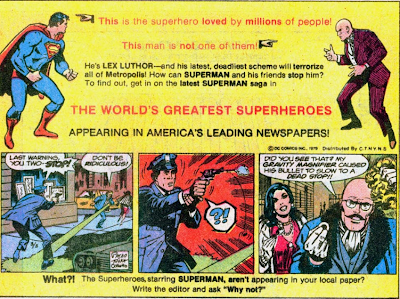 Here's a little seen comics ad from the late 1970's for the WORLD'S GREATEST SUPERHEROES newspaper strip. The strip, written by Martin Pasko and drawn by George Tuska, was essentially a JLA strip with a nod to the SUPER FRIENDS TV series that had been popular throughout that decade. Superman. Batman, Aquaman, Flash and Wonder Woman starred with others appearing from time to time. In the end, it became more or less a Superman strip.
Posted by Booksteve at 12:40 AM