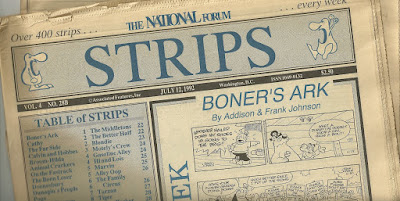 If ever there was an idea whose time had come...and gone, it was STRIPS. I have no idea how long it lasted but the only copy I saved is dated July of 1992. STRIPS was a tabloid newspaper published by the folks who published THE NATIONAL FORUM and sold wherever one would find such things in those pre-(for most of us, anyway) Interwebs days of not-so-long-ago. In a way, it was almost like a revival of the late, much lamented MENOMONEE FALLS GAZETTE (and GUARDIAN) of two decades earlier. Literally every issue would run 40 pages of comic strips good and bad, all at a nice size and most with a full week's worth of dailies per page! These days, of course, one can pick and choose on the Net which comics they want to read daily. You can subscribe to just the strips even! But in 1992, as the local newspapers continued to shrink their comics to unreadable proportions, this was, at least briefly, like a dream come true for strip fans!
What strips were in it? I was hoping you'd ask. The classic titles included the ethen-current versions of ALLEY OOP, DICK TRACY, DENNIS THE MENACE, SNUFFY SMITH, REX MORGAN MD, APT 3-G, RIP KIRBY, TARZAN, POGO, POPEYE, BLONDIE, THE FAR SIDE, DOONESBURY, BEETLE BAILEY, TUMBLEWEEDS, THE PHANTOM, ANNIE, FLASH GORDON, HAGAR and more!
Lesser known strips and panels included here included AGATHA CRUMM, BIG NATE, DUNAGIN'S PEOPLE, WHEN I WAS SHORT, ERNIE, ANIMAL CRACKERS and PICKLES.
STRIPS came out every Monday and contained all of the strips from the previous week. It was great but the timing was off. By that point the classic strips were all past their classic period, the newer ones either weren't that good or weren't as good as they'd eventually get. And then there was the Internet, lurking right around the corner and making instant comic strip gratification possible. Sigh. STRIPS, we hardly knew ye.
Posted by Booksteve at 7:05 PM