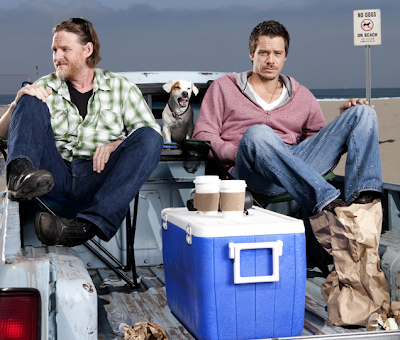 I don't watch very much US television anymore. Some documentaries here and there, the odd PBS special, ancient films on TCM and a good cartoon when I can find one. As far as regular series, I'm hooked on TRUE BLOOD and BOARDWALK EMPIRE but I have to depend on others to see them as I don't have HBO. The only sitcoms I watch regularly are THE BIG BANG THEORY and 30 ROCK and quite frankly I wasn't thrilled with the season premieres of either of those.
Which brings me to TERRIERS...my new favorite thing. I used to love FX when it was a new and unique channel but I can't even tell you where it is on the channel lineup anymore. One of my Facebook friends has been plugging their new series, TERRIERS, however as he's one of the writers and a supervising producer. So, today as I worked on a computer project, I ran the pilot of TERRIERS from HULU up in the corner and got hooked. Big time. The pilot was immediately followed by episode two and then I had to go looking for episode three!
No, it is not a dog show...although there are dogs in it. In fact, I'm not sure why it's called TERRIERS. What it is a standard TV buddy show featuring two actors with a lot of macho chemistry and a hip, clever script with a continuing backstory.
Actor Donal Logue stars as a divorced, disgraced ex-cop and recovering alcoholic working as an unlicensed private detective. His partner is Michael Raymond-James, TRUE BLOOD's season one "Big Bad." Here, he plays a former small time burglar, pickpocket and all-around hood who has hooked up with the cop who once busted him.
One of the things I like best about the show is that the episodes are not self-contained in the time-honored manner but that plots, subplots and continuing backstories overlap, cross over and even disappear for awhile at times...just like in real life. Yes, I know a lot of non-serialized detective/action series have done this sort of thing in recent years but few have done it as well and with such remarkable characters. They are not heroes. In some perceptions they might even be bad guys. Certainly low-life types that most would not want o associate with in the real world. But really, they're just trying to use the skills they have to get along in this world in today's tough economy...much like the rest of us. We see their flaws, their imperfections, their outlandish, even stupid ideas and the plots, although cleverly contrived, become incidental to the characters and the performances. I don't watch a lot of TV anymore...but after today, I watch one more show than I had BEEN watching!
Posted by Booksteve at 5:57 PM