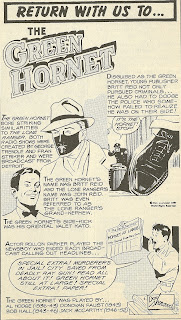 THE GOOD OLD DAYS was a magazine that somehow outlasted the nostalgia boom of the seventies and continued at least into the nineties. In spite of my interest in the pop culture of the early part of the 2oth century, I always found THE GOOD OLD DAYS to be dull and repetitive. Issue after issue, there would be features like "Do you remember bandstands? Bandstands were great. I remember bandstands. Do you?" I looked at it regularly in stores, always hoping for better but rarely finding it. 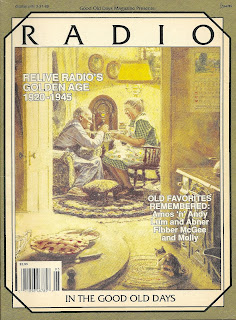 In 1990, however (or perhaps early 1989 as the copyright date conflicts with the cover display dates), THE GOOD OLD DAYS put out a special edition on RADIO, seen here.
Still dull in spots but overall, this was what I had hoped for all along. Interspersed with personal reminiscences and articles on crystal sets there were long pieces on Lum and Abner, Charlie McCarthy, radio comedy, Uncle Don, the War of the Worlds and Amos 'n' Andy. Cartoonist Don Sherwood provides a few illustrations and there's even an article by the great radio historian Charlie Stumpf (with his name misspelled) whom I would meet a few years later at the Cincinnati Old Time Radio Convention.
Posted by Booksteve at 8:37 AM